Download Nocturnal Emissions (right click and select “Save Link As…” or “Save Target As…”), or listen here:

From the early 1950’s to the late 1990’s, Flint used to have a public radio station, WFBE 95.1FM.  Mike Absher was a DJ at the station and had a long-running weekly show called Kaleidoscope.  Back in 1996, before the station went belly up and the Flint Board of Education was forced to sell it, Mike was gracious enough to give up some time on his Kaleidoscope program and allow me 30 minutes to do my thing.  I don’t remember who (Mike or Santino?) came up with the name “Nocturnal Emissions” for my segments of Kaleidoscope, but it seemed like a fitting title.  I recorded all of my appearances, took four of the best ones, and compiled them together to make one big “Nocturnal Emissions” mixtape.

There were three things that pretty much defined this particular period in time for me: Portishead’s “Dummy“, DJ Shadow’s “Endtroducing…“, Dr. Octagon’s “Dr. Octagonecologyst“, and the MoWax record label.  Trip Hop was big, Drum & Bass was big, and Acid Jazz was still hangin’ in there.  And as I mentioned in my “Fantasy Realm” post, all of the newer music from this era was perfect for mixing–the vibe and BPM’s of the different musical genres allowed me to get really creative with the blends and mashups. 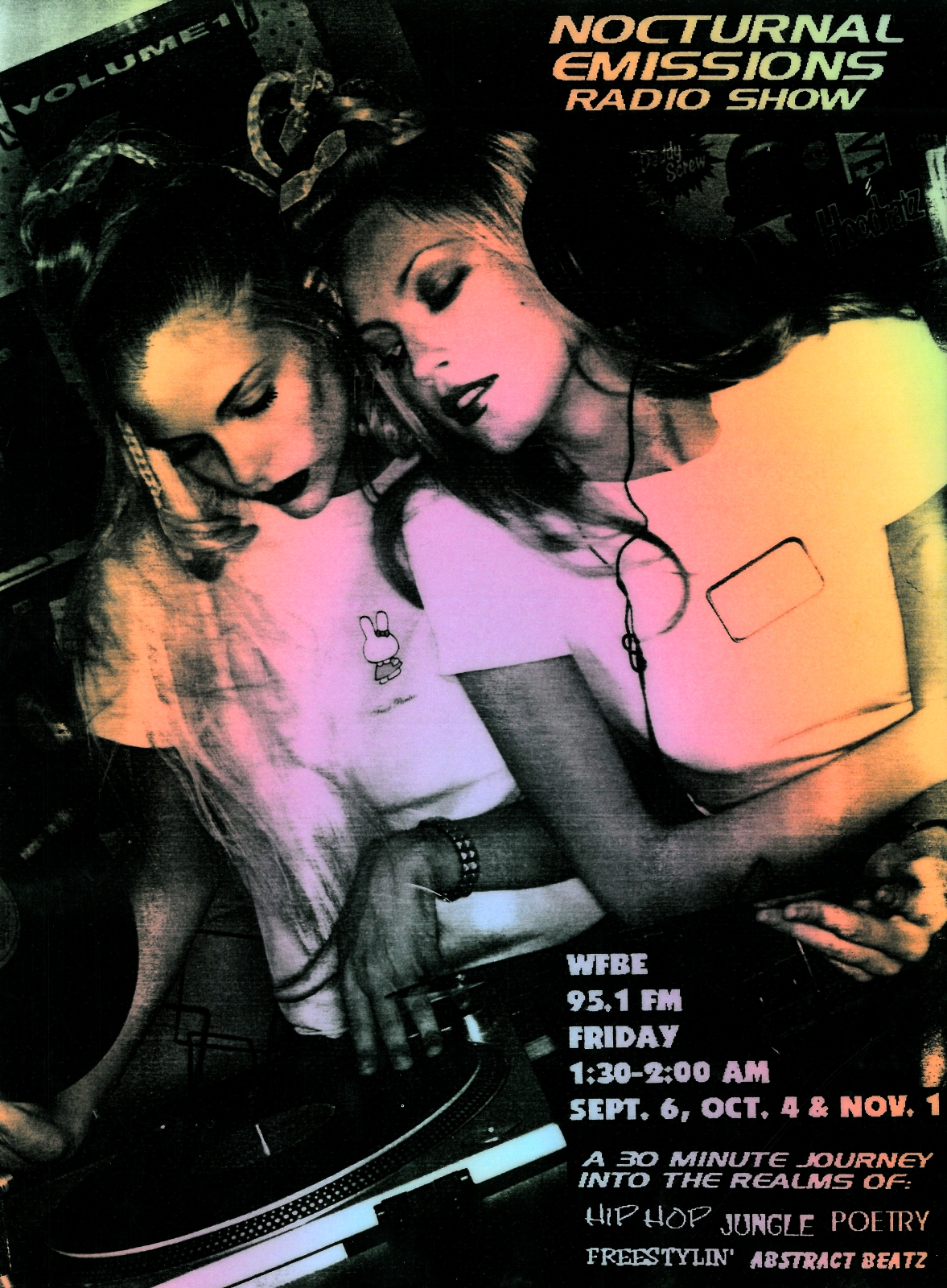 The nights at Kaleidoscope were a lot of fun for me, and I was lucky to have Mike there as a second DJ.  Not only was he handling the mixing/effects boards at the station while I DJ’d, but he also used the radio station’s turntables to add extra vocal samples/sounds (i.e., adlibs) behind the music that I was spinning.  He brought in his own quirky records from his vast personal collection, as well as one’s that he had checked out from the Flint Public Library.  Mike also invited various guests to come in during my show and do on-air poetry/rapping over the music that I was playing.  I would mix the beats and Mike would mix the volume of the vocals and play with the vocal effects.

Because I only had about 30 minutes of air time, I didn’t want to waste a single second, so I planned out my DJ sets ahead of time.  Although my tracklists were more or less “set in stone”, everything else about these nights were “fly by the seat of your pants” once Mike turned things over to me.  I was still learning how to sync and match beats, how to keep two records “on beat” while they were playing at the same time, etc., and from time to time on “Nocturnal Emissions”, you can hear certain things begin to drift and go “off beat”.  Plus, with all of the “off the cuff” things added into my DJ sets (e.g., Mike’s DJing adlibs and sample drops, the live poets and rappers, etc.), my radio shows could’ve been a complete train wreck, but everything always seemed to turn out great.  Thanks, Mike, for making me look/sound so good!

For more music of this era, check out my “Fantasy Realm” and “To Kill A Dead Man” posts!